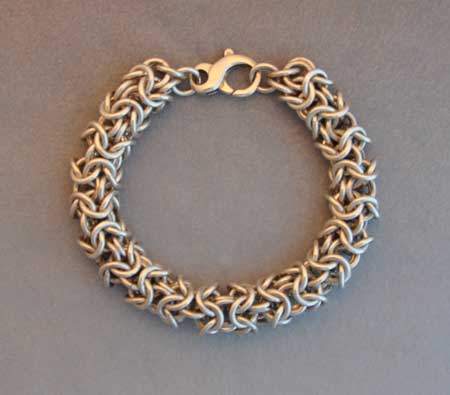 Making chain is meditative, well, at least I find that to be the case for me.  I first saw the simple version of this weave done as necklace by Christine Dhein who teaches at the Revere Academy in San Francisco.  It has been about eight years since I learned to make this weave.  I believe I bought some books and sorted it out on my own, but Christine does teach a class in how to make it and there are a vast number of variations.

I have made a number of silver necklaces in Byzantine weave, including one for each of my nieces as a high school graduation gift. However, I had yet to make something for myself.  I wanted something heavier, bolder with a more opulent look.  I had considered doing something in gold for myself, but settled on sorting out how to do a triple  variation of the standard byzantine weave.  Which was just as well, because when I was half way through, my daughter decided that it would make a really nice bracelet.  So, my necklace became two bracelets, one for my daughter and another for a very fine friend.

This bracelet is supposed to be reminiscent of the flowers in Monet’s gardens at Giverny and his paintings of them.  The colors of the flowers blend from one bed to the next and are surrounded by a white picket fence of tear drop beads.  This is another bracelet that is fun to wear as the beaded flowers continually fall  into new patterns as you move. 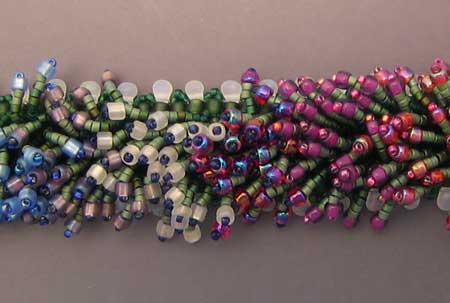 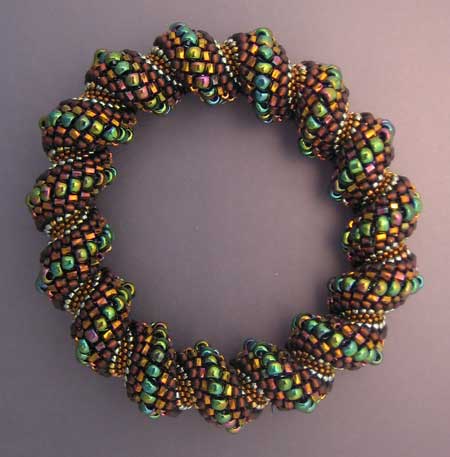 This is another design that is so interesting , that as a beader, you just have to give it a try at some point.  This bracelet is made from tubular peyote stich as is my grey necklace, also on this site.  However, with the spiral bracelet, you change the size of the bead as you work, going from a small 15/0 bead or charlotte to a 6/0 bead and back again.  The result is this fascinating spiral which happens automatically as a result of the change in bead sizes.  The hard part is connecting the two ends together to form the circle, but when you get the pattern lined up properly it all clicks in to place.  Well, more or less.

As it happens, this is another kit.  Although, it is a fairly common technique shown in a variety of books and magazines.  What you get from the kit is this lovely brown/green colorway.

Kits are great for developing a feel for what colors go together and for that lazy day, or week when you want to experiment but don’t have the right collection of bead colors or sizes. 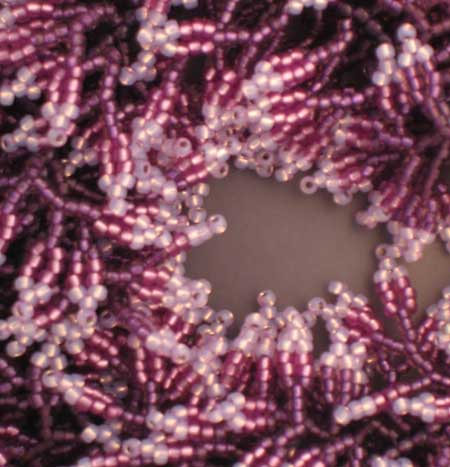 Some things are just fun, fun to make, fun to wear, fun to look at.  This is one of them.  This piece visually reminds me of a sea anemone.  It is outrageously fun to wear.  A complete distraction.

This is actually a kit.  I buy kits occasionally to learn techniques.  This one uses a branching technique that gives it the movement that makes it so enjoyable to wear.  The colorway is also interesting.  It shades from darker purple at the center to a very light purple at the end of each strand. The shading effect adds to the perceived movement.

Halfway through making this one I discovered that the beads provided with the kit wouldn’t be sufficient to finish.  So luckily I was able to sort through my bead collection and find additional beads that were a close enough match to look as though they were part of the original design.  Much of what makes this piece successful is the density of the strands.  Stopping halfway would have ruined the piece, although I am not quite sure whether a third pass would make it better.  It is a time consuming piece to make, but I don’t doubt that at some point I’ll be forced to try a denser piece just to satisfy my curiosity. 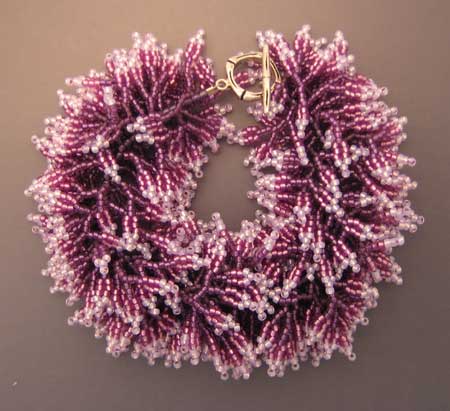