The inspiration for this necklace is a modern version of an Elizabethan ruff.  It is the next iteration in a series of experiments composed of variations on a peyote stitch chocker base supporting layers of ornamented wires.  It is similar to the Grey Necklace, or the Bronze and Prickly Necklace.  However, in this case I have used a wide flat band of peyote stitch rather than a tube and nine staggered rows of of blue czech bead dangles on copper colored wire. 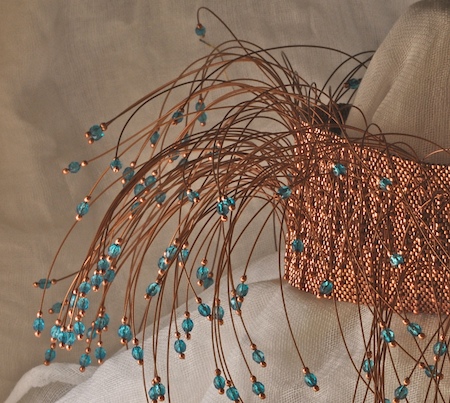 As with all projects, this necklace has been a series of missteps overcome.  Initially I had thought to weave the dangles through the peyote base as I did with the tubular necklaces, but with the weave flat, the wires created too much distortion in the peyote base.  So, it became necessary to stitch additional beads over the surface of the peyote stitch to carry the wires from which the blue dangles would hang.  Then there was the issue of sizing the wires.  If the wires were too thick, they wouldn’t drape properly, but if they were thin enough to drape nicely, they slid through the beads that supported them.  It became necessary to stitch over the wires in their bead supports to hold them in place.

The dangle necklaces are still a work in progress, however, I submitted this one to the Fire Mountain Beading Contest for seed beads.  This piece was selected as a finalist and I am awaiting the result of the final judging. 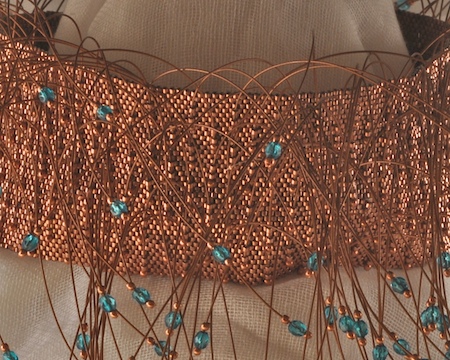